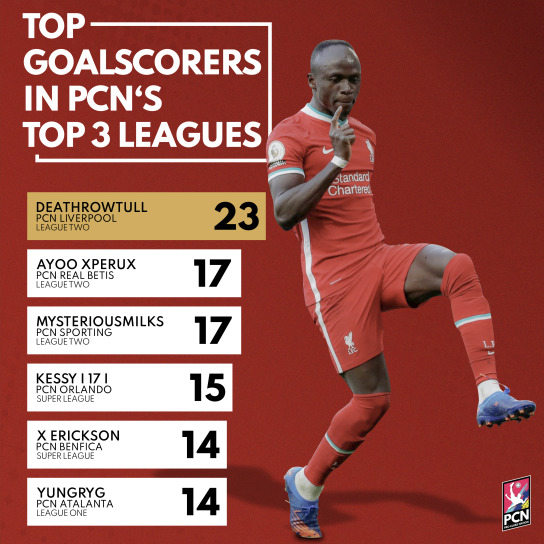 Below you find the current top goal scorers for Pro Clubs Nation, season 15. The highest goal scorer right now, in league games only, is Liverpool’s Death Row Tull. Death has taken League 2 by storm and has netted 23 goals in as little as 15 games, as he continues to put League 2 defenses to the sword.

Death Row Tull – Going against the meta, DRT, runs a 6’2 build where he steam rolls defenses using a blend of physicality and quick footwork. DRT has been massively influential to Liverpool’s unbeaten start in League 2, the stand out game for Death has to be his 92nd minute winner against Real Betis after his side let a 2-0 lead slip late in the game.

Ayoo xPERUx – Next up we take a quick look ay Real Betis’ Ayoo Peru, who has been in scintillating form thus far. With 17 goals from 34 shots, Peru is showing his clinical nature in front of goal, which has helped his side to a top 3 place so far this season. One of the goal Peru must cherish most is his winner in the game against fellow promotion hopefuls, Napoli.

MysteriousMilks – Sitting in joint 2nd, we have yet another League 2 attacker in the form of MysteriousMilks who is currently in his first season on PCN, and is clearly making a name for himself with 17 goals in 15 games. Milks is the key man in the Sporting attack and has fired his side to 2nd in the table, will the Portugal based club be able to hold onto their goal threat with the transfer window just around the corner?

Kessy I 17 I – Finally a non League 2 player, we have Orlando’s Kessy. A man, who since joining PCN has become synonymous with putting the ball in the net. This Fifa is absolutely no different, Kessy has taken Super League by storm and scored 15 goals to date. Kessy has banged multiple braces this season, but versus Arsenal he found the net on 4 occasions from his 6 shots on target.

x Erickson – After toying with the Lower leagues for the past 2 seasons, we see Erickson make his was back to Super League with Benfica. Erickson has netted on 14 occasions thus far and has the best shots per goal ratio in the list, 14 goals from 23 shot on target, a 60% conversation rate. As like Kessy, Erickson’s only hattrick has come against the leakiest defence in all of PCN, Arsenal.

YungRYG – Our only League 1 player, comes in the form of Atalanta’s YungRyg. Coming into his 3rd season with the Italian based side, after earning a Season 14 TOTS at CAM, Yung has made the step up to ST to start the season for Atalanta and that move is paying off. Having scored in 8 of his 14 games at ST, yung is showing a real eye for goals with 2 hattricks and 2 braces thus far this season.