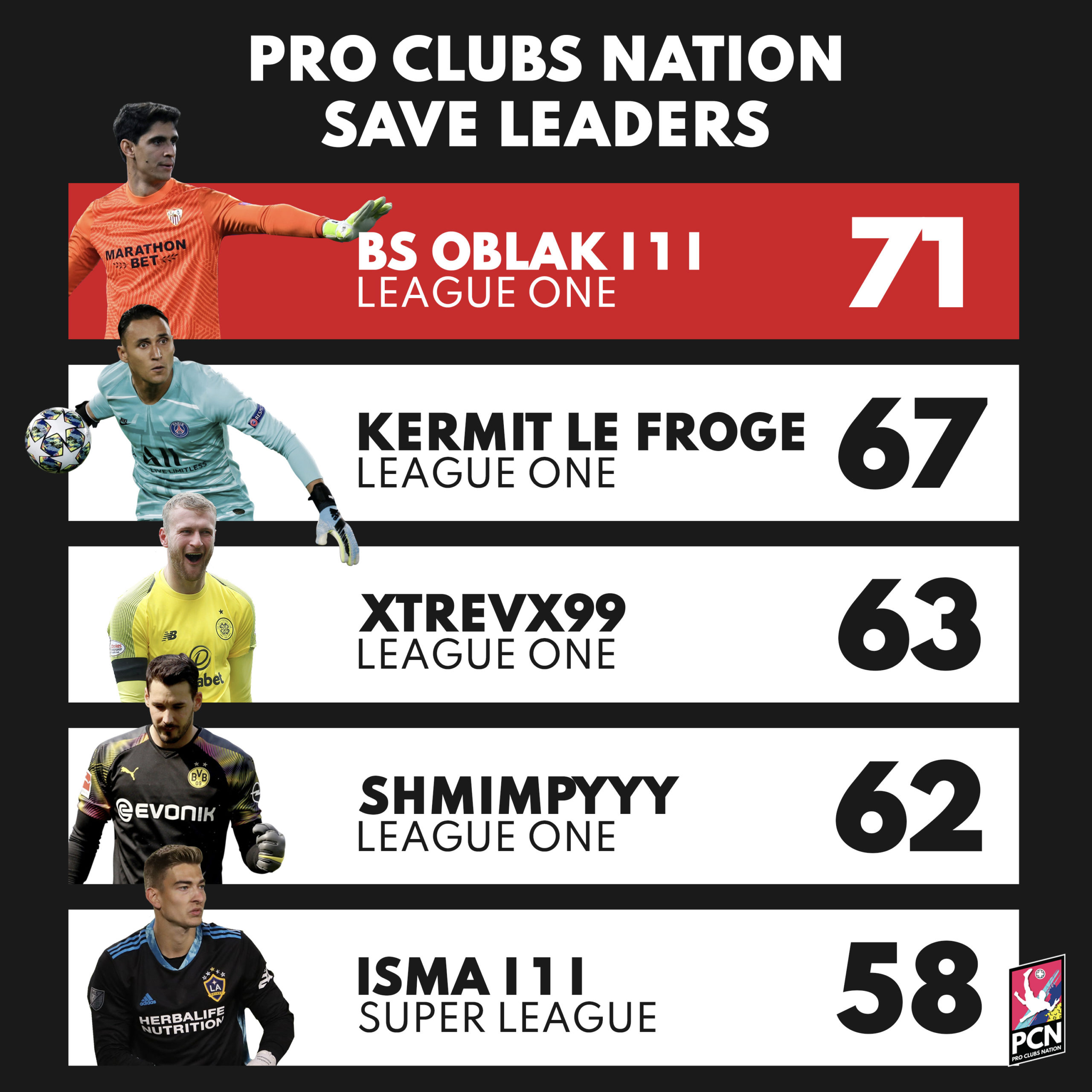 After looking at the top goal scorers in PCN, we thought it would only be fair to look the guys keeping the ball out of the net, the Goalkeepers. Here we look at the League’s leading save makers.

Bs Oblak l 1 l – Coming into his first season in PCN, there was a lot of pressure on the American born shot stopper, but he has shown he can live up to pressure. With 71 saves so far in League 1, Oblak has had some impressive games for Sevilla to keep the in games. A massive 9 saves in games against Minnesota United and Seattle Sounders (where he also kept a clean sheet).

Kermit Le Frog – Next up we see the return of PCN Legend, Kermit Le Frog. After a time away from PCN, Kermit has come back to try help Stay High with the sinking ship that is PSG. To date, Kermit has been one of the very few stand outs for the struggling French giants. With 67 saves, Kermit has been doing his best to try keep PSG in games but will need a lot more help from his defense if they are to avoid the drop this season.

xTREVx99 – After a stop start season last season, Trev will be looking to recreate his goalkeeping antics that saw him earn a TOTS in Season 13. Trev has made the move to League 2 champions, PCN Celtic, in a bid to help them succeed in League 1.  The shot stopper has done just that and has clutched up in some massive games this season with a stand out being against Dortmund where he made 11 saves and kept the cleansheet.

Shmimpyy – After earning himself a League 1 TOTS last season, and helping PSG remain in League 1 on the final day, Shmimpyy caught the eye of Dortmund management. With 2 games with 10 saves, Shmimpyy is doing his utmost to help BVB climb the table. The new BVB keeper has been lighting up the #Highlight-Video-Submission channel of late with a string of impressive saves, is he getting some highlight reels together to try make a move to Super League for next season?

Isma I 1 I – Our first and only non League 1 player to make the list comes in the form of Super League’s Isma from La Galaxy. In his first season in PCN, Isma has done well and has helped his side climb to 10th in the table with big games against Leverkusen and NYCFC where he kept 7 saves in each, with 1 cleansheet. Isma will be looking to carry this form for the rest of the season in a bid to earn his first TOTS.