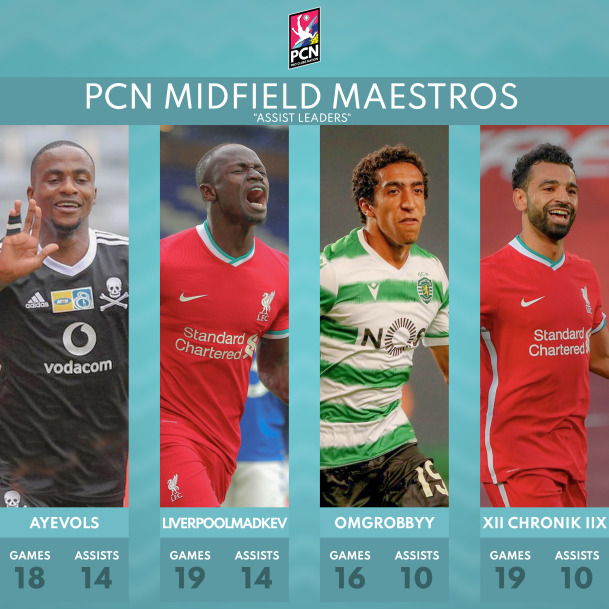 *Does not include ST’s, must have played 75% games in CAM, CM or wing*

The fascinating race to become Pro Clubs Nation top playmaker is well underway, with 4 players leading the way so far. The South African based, AyeVols currently leads the way with 14 assists in 18 games played so far. Here we have a look at the leading assister, and the chasing pack.

AyeVols – Coming of the back of a World Cup win in the break between Season 14 and Season 15, it has been another stand out season for the CB turned CAM. Vols may be a FUT rat and play 6 at the back, but on the Pro Clubs scene, he is one of the most creative players going forwards. With 14 assists and 26 Key Passes it is clear to see why he sits atop our list through 19 games. Will Vols creative spark help propel Orlando to the Super League title?

LiverpoolMadKev – Kev makes his long-awaited return to Anfield after many seasons away, and boy has he made the Anfield faithful happy. With 14 assists and 30 key passes, Kev has made a real connection with the rest of the Liverpool attack and this was shown massively in the game against Leicester City, where Kev constantly broke the foxes back line and provided 3 assists.

OMGRobbyy – With this being Robbyy’s first season with stats, we can only imagine how well he has done in previous seasons. Robbyy has been the main creative force behind the Sporting team that has gone from 2nd to last in Season 14, to 2nd in Season 15 (League 2). Robbyy has notched up 10 assists from 16 games and added a further 23 key passes, and Sporting will be hoping he can continue his fine start to the season if they are to be promoted to League 1 this season.

xII Chronik IIx – In 4th place on our list we have Liverpool’s other winger, Chronik. The Englishman has been a key man for Liverpool this season and has been the main controller of the tempo of their attack. Chronik has the license to roam into the central positions, and by doing this, he has caught teams off guard. His standout game to date came against FC Dallas where he had 1 goal, 3 assists and 5 key passes.