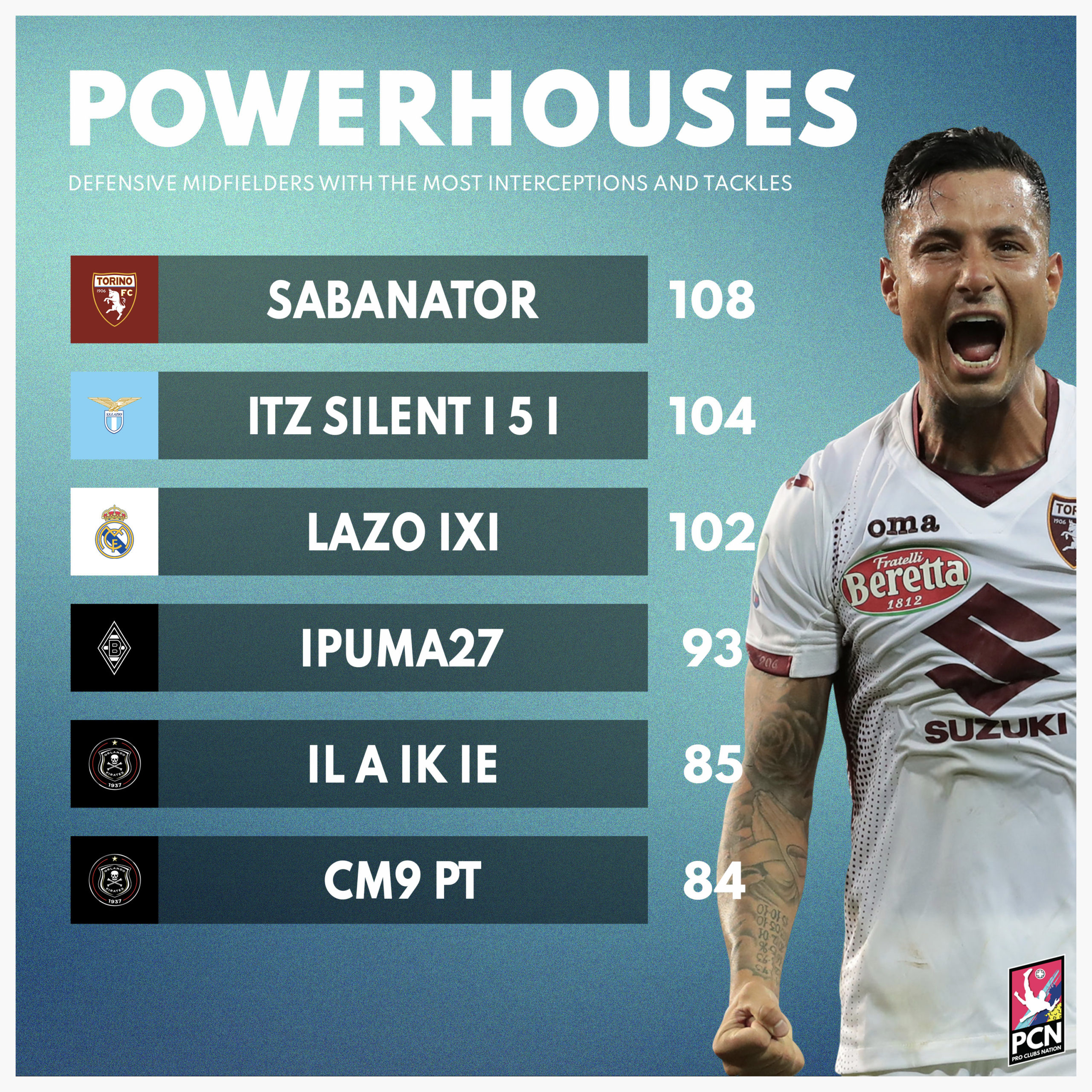 As we find ourselves in a new Fifa filled with many changes, there is one thing  that remains the same each year, forwards getting clamped. Below we have complied a list of some of the best to do it in the DM position this season, as we highlight the standout performers across all 3 leagues in combined tackles and interceptions at the halfway mark.

Sabanator181 – The man with the most records in L1 is back to business as usual, Sabanator continues to terrorize forwards with his new club Torino. With 36 tackles and 72 interceptions, Sabanator is on pace  to have yet another dominant season, and will be a driving force in Torino’s bid for promotion to Super League. Could he also find himself picking up more records along the way? With Sabanator, that is always a possibility.

ITZ Silent l 5 l –  One of the more unfamiliar names on this list, ITZ Silent l 5 l is certainly starting to make a name for himself in his Sophomore season with Lazio. Posting 48 tackles and 56 interceptions for the Biancocelesti, it is clear to see why this Lazio side has taken League One by storm, as they find themselves atop of League One table as it currently stands despite refusing to use an authentic stadium.

Lazo lXl – Making an appearance on this list is a man that is no stranger to accolades, Lazo lXl. The Real Madrid CDM asserted himself as one of the most dominant in his position last fifa, as he played a pivotal role on a Real Madrid side which  had the best defense in SL last season, as well as earning 2 TOTS honors. So how exactly is Lazo doing this fifa? Picking up  39 tackles and 63 interceptions so far in season 15, the answer is simple, different fifa, same Lazo lXl.

lPuma27 – On the list as the sole representative of League Two is Monchengladbach DM, lPuma27. Spending his entire PCN career in league two, the seven season vet is thriving at the heart of the midfield for Die Fohlen, with 35 tackles and 58 interceptions. If the German side are to fight for promotion this season they will be hoping that IPuma27 can keep up his excellent form.

lL A lK lE – Next on the list we find a name that has immediately established himself as one of the very best since his arrival in PCN with River Plate back in Season 9, Orlando CDM lL A lK lE has served as the anchor for some of the very best defenses PCN has ever seen, including CS record breaking Benfica in S12 and the title winning Orlando side in S13. Posting 33 tackles and 52 interceptions this defensive juggernaut is back at it again, as lL A lK lE finds himself an all too familiar place this season, with Orlando sitting atop of Super League at the time of writing.